Teaching and learning Hungarian at VSL

Why would the Hungarian community in Melbourne want their children to learn the Hungarian language? So many children were born in Australia and already learn a language at their regular school. VSL Hungarian teacher, Agnes Korlaki, recognises Hungarian families’ desire to maintain their national heritage and learn about their home country and culture alongside their Australian life. Children and secondary students, however, often simply enjoy the chance to socialise with other young people with similar background.

Agnes Korlaki started teaching Hungarian at Kindergarten level almost 40 years ago and worked her way up the education ladder. 2021 is Korlaki’s 15th year teaching VCE Hungarian. In 2017, she received one of Hungary’s highest awards, the “Gold Merit Cross” for her work educating children in the Hungarian language in a distant diaspora.

Korlaki came to Australia as a young child in the post-war European migration wave. As a teacher, she believes learning about your culture and language is a privilege. She explains:

Korlaki hopes Hungarian lessons spark students’ interest in their ancestors and their country of origin. The cultural interest might not happen immediately but certainly builds as young people travel through to adulthood. “Hungary may now be a small country, but the Hungarian culture is an ancient culture that has withstood so much. Be proud and go learn Hungarian, you won’t regret it.”

Teaching on Saturday mornings with the Victorian School of Languages (VSL) in Dandenong, Korlaki says her students have many levels of Hungarian knowledge and ability. The drive to learn usually comes from a parent, but students quickly enjoy the chance to socialise with a new group of friends, often forming strong friendships lasting long past their school days. Victorian students also know the value of studying a language to gain a good VCE score and enhance their university entrance ranking (ATAR).

Describing her lessons, Korlaki explains, “Over the years, there have been lots of tears and laughter, and certainly lots of socialising.” Nevertheless, under her skilled guidance, most students put their best effort into studying the language and culture of their ancestors, with top scores in VCE most years.

Korlaki taught the 2020 Victorian Premier’s Award winner for Hungarian, Borbala Szalo, and describes a student who set her sights high. [Borbala is] “a quiet determined girl who completed every task and lots of extra work. She asked questions about every mistake, about how to answer questions successfully, and the best way I could recommend to respond.”

2020 and 2021 have seen extended periods of remote learning, when Korlaki needed to run lessons via Zoom. The technology challenges of remote teaching have brought many teachers and students close to breaking point and Korlaki describes how most students started off well but eventually weaker students would miss lessons and submit less work for correction and advice.

Looking back on a rich teaching career, Korlaki says her biggest reward has been seeing friendships develop and good results achieved in students’ mother tongue. “A teacher needs to value and respect every student and I always try to respond to the best of my ability.”

Families interested in their children studying Hungarian with the Victorian School of Languages, from Foundation level to VCE, should go to https://www.vsl.vic.edu.au/. Hungarian is taught at the VSL centre in Dandenong (92-106 Princes Hwy, Dandenong, Tel 9791 9289).

Initially, Borbala Hanga Szalo chose to study on Saturdays at the VSL because Hungarian was not offered at her regular school. However, she quickly realised that the most enjoyable aspect of lessons was that she could learn about Hungary’s history and culture. Szalo believes that language study has a variety of benefits, from being able to connect to one’s own culture, to learning about different cultures. She explains, “The main benefit was to be able to speak my heritage language with proficiency and skill.”

Szalo recommends that students studying Hungarian should aim to immerse themselves in the language outside of the classroom. “In terms of exam preparation, my advice would be to practise a lot and also not to be afraid to ask questions.”

In the future Szalo hopes to study science and engineering and she hopes to go into either a meteorology or engineering field.

Families interested in their children studying Hungarian with the Victorian School of Languages, from Foundation level to VCE, should go to https://www.vsl.vic.edu.au/. Hungarian is taught at the VSL centre in Dandenong (92-106 Princes Hwy, Dandenong, Tel 9791 9289)

We're not around right now. But you can send us an email and we'll get back to you, asap. 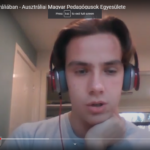